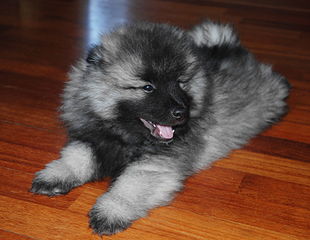 Courtesy of Noraraa
Find Keeshond Puppies For Sale on Pets4You.com. Also known as the Wolfspitz. Several countries including the U.S., Canada and Great Britain consider the Keeshond and Wolfspitz as separate breeds while other countries make no distinction. At one time these dogs were used as companions on Dutch barges. Lively, alert, intelligent and quick to learn, they make good family dogs. Daily grooming will keep the coat beautiful. They have moderate exercise requirements. These dogs stand 17 to 19" at the shoulders and have two weight ranges, 55 to 66 lbs. and 35 to 45 lbs. Females are slightly smaller. Contact the dog breeders below for Keeshond Puppies For Sale.

In some households, pets are regarded as the most important members of the family. If your family would appreciate a sweet, loving, but energetic little puppy, there's no breed quite like the Keeshond. Full of vim and vigor, the intelligent and affectionate Keeshond packs a lot of personality and life into a small package. For those with children, you will find this breed an exceptional choice.

History
Known affectionately as "a dog of the people," the Keeshond originated in the Netherlands and Arctic area in the eighteenth century. Contributing to the breed’s development were the Chow Chow, Pomeranian, Elkhound and Samoyed. Although documented that the Keeshond originated in the Netherlands, it has also been traced to the families of the American Eskimo dog and the German Spitz. In fact, the Keeshond was originally called a German Spitz in England, where the breed had been designated the Dutch Barge Dog. In 1926, the name was officially changed to Keeshond.

In the late 18th century, the Keeshond was considered a symbol of the Patriots which became the dominant political party through the efforts of the Prince of Orange. As a result, those who favored the opposing party were prone to abandon this breed. Until 1920, the breed remained sparse because only those loyal to the Keeshond maintained it. In 1920, the Baroness van Hardenbroek became intensely interested in Keeshond puppies, encouraging an investigation to determine how much of the old stock still survived. Although the breed was no longer a favorite of the general population, the Keeshond was found to be popular with farmers, truckmen, and certain captains of riverboats. When news circulated that the Baroness had begun breeding these dogs, adoptions of the Keeshond increased throughout Europe. In fact, the Baroness was responsible for bringing the breed to such renown that within a ten-year time span, the Dutch Keeshond Club was established. Today it is classified within the non-sporting group.

Appearance
Densely coated and ranging from 35 to 65 pounds when grown, the Keeshond is a sturdy dog that stands about 16 to 18 inches tall. Its fox-like facial features and fluffy coat are traits many pet owners find endearing. Like its Spitz and Pomeranian ancestors, the breed has velvety pricked ears and a pointed muzzle, along with a fully plumed tail that typically curls up over the back. The thick ruff of fur around the neck is another characteristic which sets the breed apart.

For the most part, Keeshonds have a coat that is a striking mixture of gray, cream and black, with gray being the dominant color. Because tips of the hair on the outer coat are black, the shading patterns unique to this breed are unmistakable. The impressive lion-like mane characterized by longer hair around the shoulders, chest and neck is particularly noticeable in males.

Temperament
Good-natured and affectionate, the Keeshond is a wonderful and devoted pet who relates well to both a single individual or a family. Keeshonds have been historically bred as companions, rather than for hunting or attack purposes, so their disposition is mild and gentle. However, the breed serves as a good watch dog as it is very alert and will "sound the alarm" if someone unfamiliar approaches its property. Keeshonds, who enjoy the excitement of playful activity, are an especially good breed for families with small children. Generally a patient breed, the highly intelligent Keeshond is an ideal pet for anyone seeking a lifelong friend.

Keeshonds are also used as effective therapy dogs since the breed is very sensitive to the moods of humans. However, as with any breed, it is necessary to train this dog to obey commands and understand the behavior expected of it.

Appropriate Environment
While the Keeshond will tolerate apartment living, it is best suited to an environment where it can get plenty of exercise. A daily walk is required if your pet doesn't have ample room to run and play. This breed is lively and energetic, so it is essential that exercise is made part of the daily routine.

Health
Keeshonds are prone to heart defects, hip dysplasia, and genetic eye disorders. With regular checkups at the vet, a healthy diet and exercise, most Keeshonds will live to be 13 to 15 years old. Other rare diseases may also occur including immune atopic dermatitis, ventricular septal defect, ocular cataracts, umbilical hernia, and urinary familial kidney disease. Stiffness in the neck and forelegs, fever and sensitivity to touch, may indicate Polyarteritis Nodosa, a disease that, while rare, is known to affect certain pedigree lines in the breed.

Grooming
The thick, coarse coat may suggest that the breed requires a lot of grooming, but this isn't actually the case. In most instances, visits to a groomer are not necessary. Brushing the coat from the skin out twice a week will remove loose hair.

Bathing your pet once every two months is sufficient, since more frequent exposure to soaps could create a dry skin condition. Because the Keeshond does not have an oily coat like some other breeds, loose hair does not mat up and is easily removed with brushing.

Living Area
The Keeshond will do best in an environment where it has at least a small fenced yard to run, spin, and play in. They are relatively small dogs and will do well in small indoor spaces. It is necessary to note that due to the breed's thick coat they do not do well in hot weather. They are best in cooler climates. It can be a rather active indoor dog and therefore should receive about an hour of outdoor activity a day. Due to their separation anxiety they are not good dogs to be left outdoors alone or they will bark excessively. They are also not good to be left alone at home for long periods of time. This makes them not an ideal pet for an individual or family who spends a lot of time away from home.