Find Pekingese Puppies For Sale on Pets4You.com. Historically, only the Imperial Court of China could own this breed. Over the centuries, the dog has become more mainstream. This dog can measure up to 12 inches at the shoulder and weigh up to 14 pounds. The Pekingese coat is thick and fluffy and comes in a variety of colors. Daily grooming is required for this breed. It is very loyal and protective of its family. Contact the dog breeders below for Pekingese Puppies For Sale.

A Fiercely Loyal Toy Breed with a Gorgeous Long-Haired Coat,
the Pekingese Can Be Pompous but is a Good Watchdog 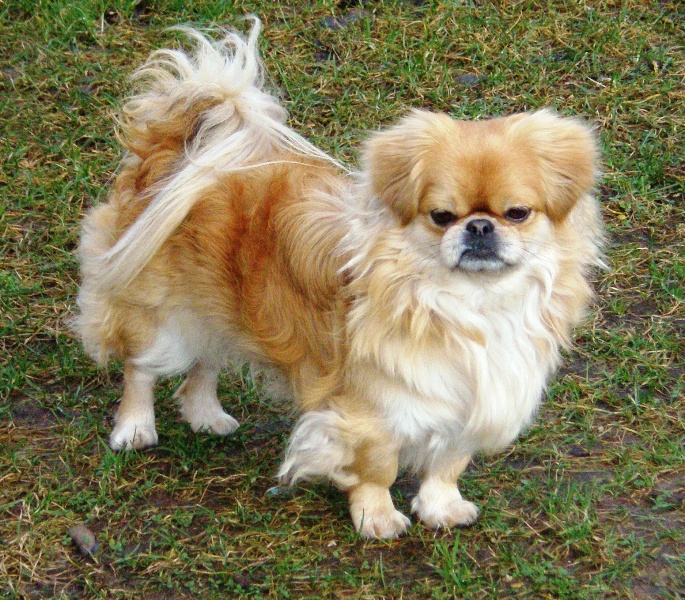 Spoiled by a history of royal lineage, the Pekingese is a fiercely loyal dog with a proud, almost pompous attitude. Cute as a button with its famous "flat" nose, the Pekingese will be content to relax around the house without much need for constant attention but big expectations for pampering!

The History of the Pekingese
DNA analysis done in recent years confirms that the Pekingese is not only a breed which is less genetically connected to the wolf, it is also one of the oldest breeds of dog. Originally bred in China, the Pekingese could only be owned by members of the Chinese Imperial Palace for centuries. Perhaps the self-important temperament that many owners see in their pets today stems from the fact that in ancient times, they were treated like royalty.

In 1860 during the Second Opium War, British and French troops occupied the Old Summer Palace in Beijing. While the Emperor Xianfeng fled to Chengde with all of his court, an elderly aunt stayed behind. When British and French troops entered, she committed suicide and was discovered with her five Pekingese dogs, all mourning her death. These five Pekingese are the dogs from which all modern- day Pekingese have descended.

Schloff and Hytien, two of the five Pekingese, were taken by Lord John Hay who then gave them to the Duchess of Wellington, his sister. Another pair was taken by Sir George Fitzroy and given to his cousins, the Duke and Duchess of Richmond and Gordon. Queen Victoria of the United Kingdom was given the fifth by Lieutenant Dunn, a dog she named Looty.

Pekingese dogs were presented to several Americans by the Empress Dowager Cixi. One of these Americans was Theodore Roosevelt's daughter, Alice Lee Roosevelt Longworth, who named the dog Manchu. The Pekingese breed became popular in Western countries around the turn of the 20th century and today is classified as a member of the Toy Group by the AKC.

Appearance
Over the years, the appearance of the Pekingese has changed very little. Low to the ground, the body is typically compact and muscular, with a double coat that is exceptionally long and beautiful. Some of the colors found in this breed include red, gold, sable, tan, blonde, and black.

The most memorable physical features of the Pekingese are its "smooshed-in" face and bulging eyes, a combination that makes for a strangely cute and lovable expression. As adults, most weigh up to 14 pounds and are approximately 9 inches tall at the shoulders.

Temperament
While your puppy may look like a fluffy little ball that wouldn't hurt a flea, rest assured that it is one tough cookie. Good-natured and affectionate with its "family," the Pekingese may bark aggressively when strangers approach. The temperament of your pet will depend largely on its training, socialization, and heredity. Some are curious and playful, while others are more aggressive and prone to "beating up" its siblings. It is important when choosing your pet that you evaluate the entire litter so that you can see the personalities of the parents, and how the litter interacts.

Although some Pekingese will bark vehemently at unfamiliar visitors, most are quite polite to guests and get along well with other pets in the household. A poised and proud breed, the Pekingese is a good choice for those looking for a pet that doesn't demand constant attention. However, don’t be surprised if you find this dog pampering itself on your favorite pillow or relishing its place of honor on your couch as if it owns the place!

Proper Environment
The Pekingese can live in almost any environment, mostly because it requires very little activity. Whether you live in an apartment, small home or on a ranch in a rural setting, your pet will be happy with just enough exercise to benefit its health, such as a daily walk.

It's important that your pet can sleep indoors, particularly if you live in a hot or humid area, as this breed is intolerant of heat.

Health
Overall a healthy breed, Pekingese may have a few health issues including skin and food allergies, eye problems, and back problems. It can also suffer heatstroke if you live in an extremely hot area. This is largely due to the fact that the Pekingese has extremely short nasal passages because of its flat face, and cannot cool itself down in hot or even moderate temperatures as quickly as other breeds. Its thick coat also makes hot temperatures uncomfortable.

Slipped discs and arthritis are other conditions that may affect your dog, although these are not common. Because the Pekingese has gotten larger in size over time and the breed's bodies have become longer, more strain is placed on the back, which can lead to these conditions. Severe disc problems can potentially leave your pet paralyzed, so try to restrain your pet from excessive jumping and stair climbing.

Grooming
Pekingese require extensive grooming because of their double coat and long hair. It's best to begin grooming your pet as a puppy, so that it is conditioned to the routine and will put up less resistance as an adult.

Brush your dog's coat to remove loose hair and tangles regularly. Brushing daily will keep the coat free of tangles and help prevent matting. The Pekingese does not need frequent bathing, and in fact should be bathed only once every 4 to 6 weeks to prevent drying out the skin. Bathe using a mild dog shampoo of good quality. It is recommended to blow dry on a low heat setting after bathing, using a brush to prevent tangling. Towel drying will tangle the hair, and is not advised.

Trimming with clippers will help keep your pet's coat neat in appearance, and will help deter tangling as well. For good hygiene, trim the hair around the genital area.

Colors
All coat colors are acceptable and of equal merit.

Living Area
Although the Peke has a thick coat and can tolerate the cold, they do better as an indoor dog. They do not tolerate the heat at all and will quickly overheat. Pekes are not good swimmers and extra care should always be taken when they are around swimming pools, lakes, or major water sources.