Find Sloughi Puppies For Sale on Pets4You.com. The Sloughi is an ancient breed of Sighthound native to Libya and the Maghreb. These dogs are intelligent, curious, independent and highly efficient hunters. Their keen vision, speed and stamina makes them ideal for chasing down their prey. They are always alert for moving objects. Sloughis are affectionate, gentle, playful, subtle and very loyal to their owner. They are excellent watch dogs. They get along well with children and other pets. Sloughis require lots of exercise. Contact the dog breeders below for Sloughi Puppies For Sale.

A Proud, Gentle Dog Who Resembles a Greyhound but Has Strong Hunting Instincts 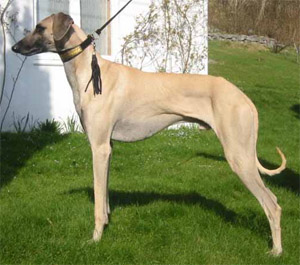 The Sloughi is an ancient sighthound breed with an athletic, lithe and leggy build like that of a Greyhound or Whippet. While it is a very affectionate, gentle pet, it is also an excellent hunter with a strong prey drive. Characterized by a melancholy expression that can be common among sighthounds, this dog has a dignified elegance which some misinterpret as similar to the aloofness of a cat.

History
The Sloughi is originally from Morocco, but also has history in North Africa’s Algeria, Libya, and Tunisia. The dog was first mentioned by a 13th century writer, Al Mansur of Morocco. Also known as the Arabian Sighthound, this moniker is actually incorrect because the Berbers, the nomadic indigenous people of North Africa, are the ones who developed the breed. Saudi Arabia is to the distant east of the North African region where Morocco sits as its most northwestern country. Arabia is located more than 5,000 miles from Morocco, past the Red Sea, south of the Middle Eastern countries of Jordan, Syria, Lebanon and Iraq.

For its original owners, the Sloughi was highly revered as a member of the family. As treasured as horses, the dogs were allowed to eat and sleep with family members inside tents. They were so beloved that when nights were cold, owners would actually give the dogs their own blankets to keep them warm. Sloughis were decorated with jewels in life, and mourned as family in death. This dog was King Tutankhamen's favorite breed and is extensively depicted within his tomb artifacts.

The breed made its way to Europe in the 19th century when soldiers who were stationed in North Africa brought these gentle and very loyal hunters home. The dog was recognized by the Federation Cynologique Internationale in 1935, but the onset of World War II interrupted what would have been the breed's increase in popularity. The Algerian French war meant that breeding did not resume in Europe until the late 1960s.

The Sloughi was introduced to the United States in 1973, but it wasn’t until 1995 that it received official recognition by the United Kennel Club. The American Kennel Club accepted it into its foundation stock service in 1997, but was not admitted into the AKC’s performance events until more than nine years later. In 2010, the American Sloughi Association became the breed's official parent club. Today, these dogs compete in the AKC’s Miscellaneous Class at conformation events, eligible since January 2011. They are designated as members of the Hound Group.

Appearance
Typical of sighthounds, the Sloughi is slender and athletic, with long, flat muscles – less brawny than the Whippet or Greyhound but similar in appearance. It's exceedingly strong and fast, with fanciers comparing it to a cheetah. Despite its delicate appearance, though, the Sloughi is not a fragile dog. It has a prominent skeletal structure, lean and with little fat, a long elegant head, large, dark, expressive eyes, and a somewhat lugubrious expression. The ears are floppy (as with many sighthounds), with a graceful, powerful arched neck. Its rabbit-like feet have middle toes that are longer than the other two, with slight webbing that makes it easier to run on soft sand.

In adulthood, the medium-sized Sloughi weighs between 45 and 65 pounds and stands 24 to 27 inches at the shoulder. Short and smooth, its fine coat can develop an undercoat in the cold, although this isn't common. Colors are cream (like sand), or mahogany-red. Coats can also be mottled, with both darker and lighter colors, including small white patches on the toes or chest. White patches or markings are acceptable for show, but any other white will lead to disqualification. Sloughis can also be dark to nearly black. As a nod to its ancestry, it's been said that the Sloughi's coat bears all the colors of the North African desert plains.

Temperament
A lovely, docile animal, this dog exhibits great sensitivity as well as dignity. With a manner that is sometimes viewed as aloof, the dog is more accurately manifesting its aristocratic origins. Some say that the Sloughi has a disposition similar to that of a cat, quietly attentive but shy. However, as proud as this dog is, it will establish very deep bonds with you, its owner. Sloughis really don't like strangers, although they'll tolerate them if you do. Sloughis are quiet, tender dogs that aren't aggressive unless directly provoked.

As a result of its hunting background, this dog will instinctively react to prey, and cannot be trusted with any animals it might attack, which can include cats, smaller dogs, neighborhood pets and any smaller wildlife. With that knowledge, you will need to allow this dog to live indoors with you, to recreate the strong bonds it had with its ancestors in North Africa.

Even if you socialize your Sloughi puppy the instant it enters your home, you should always be vigilant if you have other pets. In addition to supervising this dog around familiar pets in your family, keep a close eye on its interaction with other animals in your neighborhood. By always keeping it on a leash, you will be able to better control its activities. And, while older children will be able to understand the Sloughi’s reserved nature, younger, rambunctious children may intimidate the dog.

Finally, remember that because the Sloughi is at heart a sighthound, it will be inclined to pursue prey in an instant. With cheetah-like speed and a singular focus, it could enter dangerous conditions in the presence of high traffic. Your responsibility will be to protect this dog from inadvertent harm.

Training must be done with positive reinforcement only. As a proud, independent, and exceedingly sensitive animal, overly harsh verbal discipline could permanently damage this dog. And, physical punishment should never be used.

Finally, your pet needs to run – and run, and run. Make sure you expose it to plenty of exercise every day. This is a dog who will thrive on a good daily run alongside you for ideal camaraderie.

Health
Because of the Sloughi's ancient history, it's a very healthy breed and can live 10 to 15 years easily. On rare occasion, these dogs can develop progressive retinal atrophy, although this can be avoided with genetic testing. If parents are free of progressive retinal atrophy, the disease will not occur in offspring. If a dog suffers from PRA, it can breed with a normal dog that is not genetically predisposed in any way to PRA. While those puppies will be carriers of PRA, they will not be affected personally. This is sometimes necessary because dogs of otherwise great quality may need to be used in a breeding program.

Grooming
The Sloughi has a very short coat and usually no undercoat. It can develop a doggy odor if wet. Dirt and mud simply fall off when the fur dries. As a desert hound, you must protect your pet in cold or wet weather with proper clothing.

Grooming is easy with a rubber brush or grooming glove to remove any loose hairs. The Sloughi is an average shedder, and may be suitable for owners with mild allergies.

References
AKC Meet the Breeds®: Get to know the Sloughi.
https://www.akc.org/breeds/sloughi/index.cfm.
Retrieved July 28, 2014.