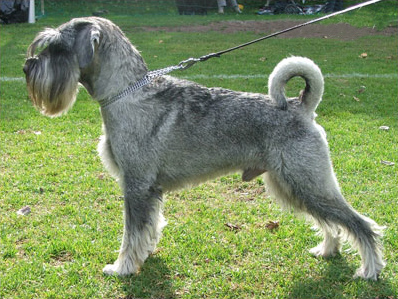 A Very Smart Dog Who Can Benefit from Obedience Training

Schnauzer: This Oldest of the Three Schnauzer Breeds Is a Dignified, Medium-Sized Working Dog and Family Pet

The Schnauzer, or Standard Schnauzer, is the oldest of the three Schnauzer breeds (the others being the Giant and Miniature). Originally used as a watchdog, hunting dog, and gatherer, the Schnauzer is still good at these things – but is most often used today as a companion and show dog. The breed's dignity contributes to its excellence at both of these tasks. Often referred to as the "thinking dog," the Schnauzer is also extremely smart.

History
The oldest of the three Schnauzer breeds, the Standard Schnauzer was first depicted in art work by Albrecht Dure, in 1492. At that time, the Schnauzer was a working dog that guarded livestock and property, killed rats, mice, and other vermin, and worked as a guardian or protective dog for merchants and farmers as they traveled to or from the marketplace. Their ancestors were originally guardian and herding dogs, as well.

At some point, Wirehaired Pinchers, as Schnauzers were originally known, were crossed with the black Standard Poodle and the gray Wolfspitz. The resulting salt-and-pepper and black coats that are today the hallmark of the Standard Schnauzer came from these breedings. First exhibited in the 1870s, a breed standard was written around that time that described the Schnauzer much like the modern version of the dog. Wirehaired Pinschers were renamed Schnauzers thanks to the dogs' muzzles ("schnauze" in German), which looked as though the dogs sported mustaches and beards. A popular dog show in the 1870s also made a play on "Schnauzer," and the name stuck for the breed.

In the early 20th century, around 1900, a few Schnauzers made their way to the United States. The American Kennel Club recognized them as their own breed in 1904, but the Schnauzer Club of America was not formed until 1925 but split in two in 1933, with one group devoting itself to the Standard Schnauzer, and the other the American Miniature Schnauzer. The Standard Schnauzer was classified as a Terrier in America, while in Germany it's considered a working dog. Prior to World War I, 90% of dogs were used to guard farm produce when in the marketplace. They were called "dogs with human brains," and were used during the war as carriers and as aides to the Red Cross. In Germany, they were also used for police work.

In America, they were (and still are) used as guard dogs and now excellent companions. They are also distinguished as superb show dogs and were recognized by the American Kennel Club as members of the Working Group in 1904.

Appearance
"What say, old chap?" You can almost hear the Schnauzer uttering such words as it strokes its whisker-enhanced chin. Schnauzers are known for their distinctive “beards” and feathery eyebrows. They're generally salt-and-pepper in color, or can be black and white, or sometimes brown. The typical cut for the Schnauzer is closely shaved on the back with long, curly fur on the legs and (if a show dog) can have its back fur stripped by hand. The ears are typically cropped and the tail is docked. The Schnauzer's double coat is wiry externally and soft underneath. When dogs are stripped, the undercoat is removed and the hard top coat grows in more fully. Schnauzers' undercoats should be stripped at least twice yearly. If you decide to shave your pet, it will lose the hard top coat and soon will only develop the soft undercoat. In adulthood, Schnauzers stand about 18-20 inches at the shoulder and weigh 30 to 45 pounds.

Personality
Clever and curious, the highly intelligent Schnauzer can also be strong-willed and stubborn. By providing continual gentle discipline and structure, though, you'll soon have a loyal, loving, and "usually" obedient pet.

Schnauzers can be territorial, so expect some barking when visitors arrive. Wary of strangers, the Schnauzer will eventually love anybody it sees often – but will always make an excellent guard dog in that no one passes muster until your pet decides it's okay.

Schnauzers are high energy, and need lots of exercise. Mental and physical stimulation, both, are imperative if you want to keep your pet out of trouble. Expect long daily walks and lots of romping in the yard. It’s also advisable to enroll your pet in obedience training while it is still a puppy as well. Not a wall flower, your puppy (and your adult Schnauzer) will be very curious and want to know everything that's going on all the time.

Because Schnauzers are so smart, you should start training your puppy as soon as you bring it home. At eight weeks, it can begin to learn good manners. Don't wait too long or you'll have a headstrong and very intelligent stubborn mule to contend with. Socialize as much as you can, all the time.

Even with socialization, Schnauzers tend to be territorial, so the more, the better. Again, obedience class is a wonderful idea for the Schnauzer, beginning at about 10 to 12 weeks old as long as immunizations are up to date.

Health
You should expect your breeder to give you a health guarantee on the puppy you adopt. In addition, run from any breeder who says that your Schnauzer puppy is "100% healthy," or from one who isolates any puppies for health reasons. Schnauzers tend to develop eye problems like retinal dysplasia and cataracts, hip dysplasia, and a heart condition known as pulmonic stenosis. Hemophilia (a bleeding disorder), hypothyroidism, and bladder stones can also be common. Your breeder should be able to show you evidence that your puppy's parents have been cleared for hip or eye problems from the OFA or PennHIP and the Canine Eye Registry Foundation, respectively.

Schnauzers tend to be portly especially as they get older, so make sure to keep your dog trim and active, and visit the vet regularly for checkups. The Schnauzer can live up to 15 years in good health.

Grooming
Brush daily with a short wire brush, which is especially important to make sure the undercoat does not become matted. If mats occur, clip out knots and brush in the direction of hair growth, then against it to lift the coat. If you choose to groom your pet yourself and you're not planning to show, you can simply clip your dog all over twice a year and then trim around the eyes and whiskers as needed. Clean whiskers after meals for hygienic purposes. Schnauzers generally shed very little.

References
AKC Meet the Breeds®: Get to know the Standard Schnauzer.

Colors
black, black and silver or salt and pepper

Living Area
Indoor with regular exercise and a large fenced yard if possible.