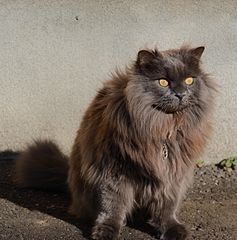 Find Tiffany (Chantilly) Kittens For Sale on Pets4You.com. (non-Burmese) Named after a famous roaring '20's theater representing elegance, this semi-foreign, semi-longhair low maintenance cat sheds very little. The breed is devoted and loving, with a moderate activity level. Average size is 8 to 10 lbs., and it comes in solid and tabbycolors in black, blue, chocolate and lilac. Contact the cat breeders below for Tiffany (Chantilly) Kittens For Sale.

A Rare and Controversial Long-Haired, Beautiful Cat Who Sheds Little,
Loves Children or the Lap of a Quiet, Inactive Person

Longhaired but not a shedder, rich in color, and with the personality of a very polite houseguest, the Chantilly-Tiffany cat is a strikingly beautiful and darling pet. Yet, its muddled background has contributed to some confusion about its name, its origins and its popularity.

Originally, this breed was labeled a “Foreign Longhair” but in the interest of giving this beautiful cat a more elegant name, “Tiffany” was chosen by one of its developers. Unfortunately, a British cat was also called Tiffanie which complicated the issue. So, the name Chantilly was settled upon but confusion still reigns supreme.

As to its genetic history, here we have another mess. During its cloudy period of development, some believed this cat possessed the traits of Burmese, long-haired Asians, Himalayans, Angoras, Havanas and Abyssinians, but there is no conclusive evidence that any of those breeds share in this cat’s lineage. The only verified documentation includes a beginning in 1967 when a New York breeder crossed a pair of long-haired, richly-colored mocha cats with eyes of gold and an unknown history. Possibly related, these two cats produced six identical lushly chocolate kittens which astonished both the breeder and her veterinarian.

Independently, a similar cat appeared at the doorstep of a Canadian resident in 1973 and gave birth to a litter with the same golden eyes and long-haired chocolate coat. The two events were united when cooperative subsequent endeavors attempted to further this breed. The result was a diversification of its range of coat colors and patterns and a more widespread appreciation. However, the major feline organizations have yet to recognize this cat as a formal breed with the exception of the ACFA who registers the Chantilly as “EXP” (experimental) and the Traditional Cat Association who has proclaimed the name to be “Tiffany/Chantilly.” Confused? No doubt about it!

The Chantilly-Tiffany, like the Devon Rex, Tonkinese, Snowshoe and American Curl, has a “semiforeign” body type which means it is not as slim as cats in the “foreign” body category. The Chantilly- Tiffany has a somewhat thicker build with medium bones and long lines, generally thought to be a medium-sized, moderately-built, average cat. Its full, semi-long coat has no undercoat which makes its luxuriously soft, silky fur very easy to groom and heavenly to touch. Remaining a kitty at heart for the first two years of life, its true physical characteristics won’t mature until then as well. Eyes can be a range of golds, yellows or even amber and will become more vivid as the cat gets older. A gorgeously full neck ruff and plumed tail enhance its appearance along with high cheekbones, a square muzzle and inconspicuous whiskers to complete the picture.

Extremely affectionate but not obnoxious, the Chantilly-Tiffany will converse softly with its favorite people and can often be found enjoying a quiet interlude on the lap of an older, single owner. Not a fan of loneliness, as is true of many pets, this cat prefers a companion, human or otherwise. While a little self-conscious around strangers, it adores children and can tolerate unusual behavior and unfamiliar circumstances without batting an eye.

The most important health concern involves its heavily-haired ears which can trap ear wax requiring regular attention. While low-maintenance in a general sense, the Chantilly-Tiffany may suffer digestive delicacy with abrupt dietary changes or the presence of corn-based foods. A wise regimen should include brushing of the coat, neck ruff and hindquarters, as well as dental hygiene to preserve optimal overall health.

With the lure of addiction to its mane of total bliss, this cat can intoxicate with sensual decadence. The Chantilly-Tiffany is so divinely soft and unbelievably plush that it will entice you to hold it on your lap for hours. Since its coat sheds little and does not mat but cannot be technically rated as hypoallergenic, people with allergies may find this cat to be less of an environmental irritant.

While most people prefer chocolate, both in color and in taste, consider some of the other available colors which too can be elegantly rich! Just think French vanilla, caramel, cinnamon, cocoa, chestnut, ginger...you get the idea!